When your teachers talk about academic literature they often mean that your sources must be reviewed by independent experts in the subject. This is called peer review or expert evaluation, and relates primarily to academic articles. In many databases you can choose to search for articles only from journals that use peer review. Here’s an example from Primo of what this can look like: 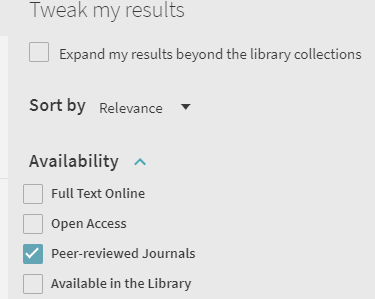 If this possibility doesn’t exist you can use the search engine ULRICHSWEB to check whether a journal uses peer review. Search for the journal you wish to check, and then look to see whether there is a heading called “Reviewed”, as in the example below:

A scientific layout for articles

To determine whether a particular article is academic you can also look at how it’s structured. It usually follows a structure called IMRAD. It looks roughly like a student essay:

Introduction: Why was the study undertaken? What was the research question?
Method: How was the study done?
Results: What are the findings?
And
Discussion: What do these findings mean?

The headings don’t need to be exactly the same as above, but these parts are nevertheless often included in some form. This applies, however, only if the study is empirical, that is to say that the researchers have collected in their own study material through for example interviews, questionnaires, experiments or similar. More theoretical articles often have a freer structure.

Doctoral theses and other academic texts

Sometimes books are also peer reviewed before they are published. This seldom occurs for books written in Swedish, so it primarily applies to foreign books. Unfortunately there is no easy way to see whether a book has been reviewed. For books consisting of chapters written by different authors there is always an editor who reviews the contents of the book, but this review is not regarded as a peer review.